The Beginning
Prior to 1946, fire protection in Keller depended on neighbors using water hoses and buckets, and on other surrounding small towns that had established fire departments. In 1946, a fire occurred in a mechanic shop located on Vine Street near Main Street, which was owned by Alfred Lee Pipkin. The City of Keller was not incorporated at that time, so local business owners and community leaders stepped up and lead a drive to start the Keller Fire Department. M.B. Stephenson, who would later be the department’s first fire chief, had fliers printed and helped organize a pie supper which was held at the Rock Gym. Through their efforts, $501 was raised and, along with other donations, they were able to start the fire department.

The Keller Fire Department consisted of Junior and Senior members; Junior members were boys in high school while Senior members were men from the community such as farmers or local business owners. The Junior members were needed during the day because a number of Senior members could not leave their work. In fact, when a fire was reported during the school year, the high school would receive a call from the fire department and the boys were allowed to leave school and respond to the call. This system was in place until the late 1970s. Some early members of the Keller Fire Department were J.C. Samsill, Charley Wilkinson, W.L. Blevins, Roy Thorton, Hugh White, Billy Mac Blevins, Joe Knox, A.B. Harmonson, O.L. Marcum, Archie Smith, Willis Berry, Alfred Lee Pipkin, Gaines Blevins and M.B. Stephenson.

Fundraising
Fundraising was an important part of the fire department in the early days, and a weekly rodeo was organized by the fire department and the Keller Lions Club in the 1950s to assist with fundraising efforts. The Dal Worth District Fair Rodeo, or Keller Rodeo as it was often called, was one of the largest rodeos in the area. The rodeo grounds were located at the current location of the Keller Lions Club at the intersection of Keller Parkway and Cindy Street.

Fire Hydrants
In about 1947, fire hydrants were purchased and installed by C.G. Johnson, owner of the Keller Water Works and Keller Grain Elevator. Recognizing a need and a community without extra funds available, he provided them at no cost to the fire department or citizens. 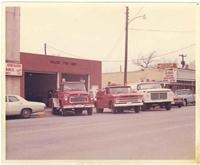 Career Firefighters
As the city grew in the early 1980s, the need for a full-time, paid department was recognized. Keller's first career firefighters worked during the day, while the volunteers covered nights and weekends. Increased demand within the community led the department to begin 24-hour shift staffing in 1987 with a handful of career staff. The fire department remained a combination career/volunteer department until 2000. Since that time, the fire department has continued to grow to meet the needs of the City of Keller.