Neuschwanstein Castle is a 19th Century Romanesque Revival palace located on a hill above the village of Hohenschwangau in southwest Bavaria, Germany. The palace was commissioned by Ludwig II of Bavaria as a retreat and as an homage to Richard Wagner.

The palace was intended as a personal refuge for the reclusive king, but it was opened to the paying public immediately after his death in 1886. Since then, more than 61 million people have visited Neuschwanstein Castle. 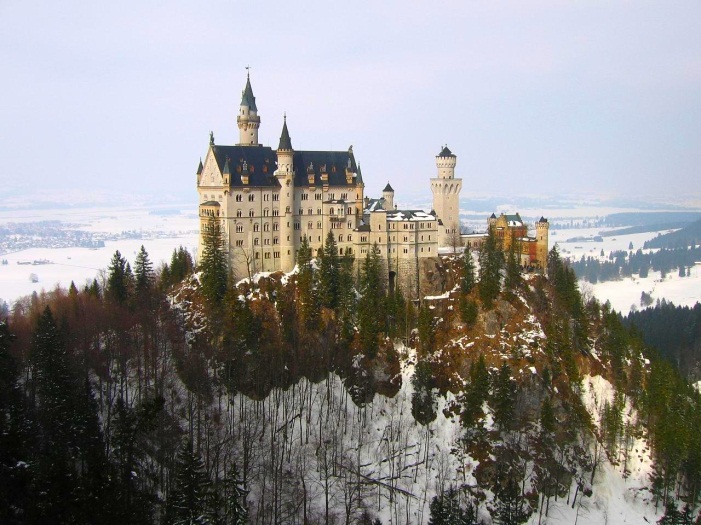 1. Neuschwanstein means “New Swan Stone”. The name of the castle derives from one of Wagner’s opera’s character, the Swan Knight.

2. The Neuschwanstein castle was built for only one person – the King Ludwig II. Neuschwanstein is so immense though, that in some days it is visited by up to 6000 tourists.

3. Ludwig slept only 11 nights in the castle

4. Ludwig was Richard Wagner’s patron, and many rooms of the castle were inspired by Wagner’s operas.

5. Even so, Wagner never had a chance to visit the castle as he died before it completion.

6. The castle is one of the most photographed buildings in the world, even if photography is not permitted inside of the castle.

7. There is no throne in the castle, as the Throne Hall was not completed before Ludwig’s death.

8. The Sleeping Beauty Castle’s design in Disneyland was inspired by Neuschwanstein Castle.

9. Fourteen carpenters worked for more than four years to make the woodwork in the bedroom.

10. Despite its medieval look, it was built in the 19th century, and it served no defensive purposes.