The Great Sphinx of Giza, commonly referred to as the Sphinx, is a limestone statue of a reclining or couchant sphinx (a mythical creature with a lion's body and a human head) that stands on the Giza Plateau on the west bank of the Nile in Giza, Egypt. The face of the Sphinx is generally believed to represent the face of the Pharaoh Khafra.

The Sphinx is the largest monolith statue in the world, standing 241 feet long, 63 feet wide and 66.34 feet tall, and is the oldest known monumental sculpture. It is commonly believed to have been built by ancient Egyptians of the Old Kingdom during the reign of the Pharaoh Khafra (c. 2558–2532 BC). 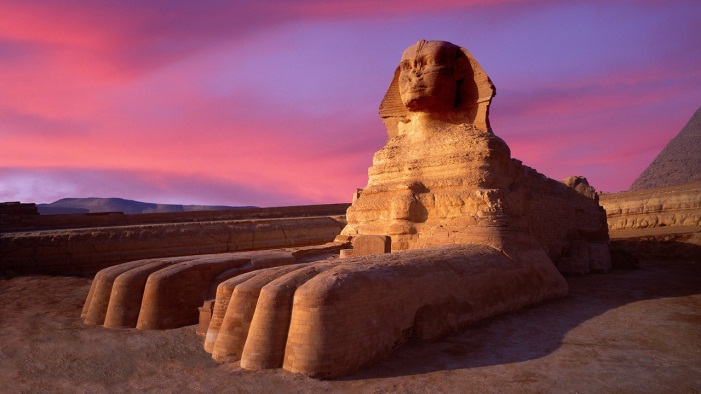 Riddle of the Sphinx

The Great Sphinx is an international symbol of mystery and controversy. It is the world's largest statue and one of its oldest, yet basic facts about it are unknown, such as the real-life model for the face, when exactly it was built, and by whom it was built. These mysteries have collectively earned the title "Riddle of the Sphinx", a nod to its Greek namesake, although this phrase should not be confused with the original Greek legend.

The face of the Great Sphinx is generally thought to be a portrait of the Pharaoh Khafre (also known by the hellenised version of his name, Chephren), which would place its construction in the Fourth Dynasty (2723 BC–2563 BC). However, the idea that the face is that of Khafre is only based on the fact that his pyramid is behind the Sphinx when coming from modern Cairo; the political center of Ancient Egypt was Memphis, south of the Giza plataeu. When approching from Memphis the Sphinx is seen in profile in front of the Great Pyramid of Khufu, who shares more physical similarities with it and was built by his son. When compared with statues of Khafre at the Cairo Museum, it is evident that the face on the Sphinx is different from the face on the statues.

Other theories exist. In 2004, French Egyptologist Vassil Dobrev announced the results of a 20-year re-examination of historical records and uncovering of new evidence that suggest the Great Sphinx is the work of a forgotten Pharaoh named Djedefre, Khafre's half brother and a son of Khufu, the builder of the Great Pyramid. He suggests it was built by Djedefre in the image of his father Khufu, identifying him with the sun god Ra in order to restore respect for their dynasty.1

Other alternative theories re-date the Sphinx to pre-Old Kingdom – and, according to one hypothesis, to prehistoric – times.