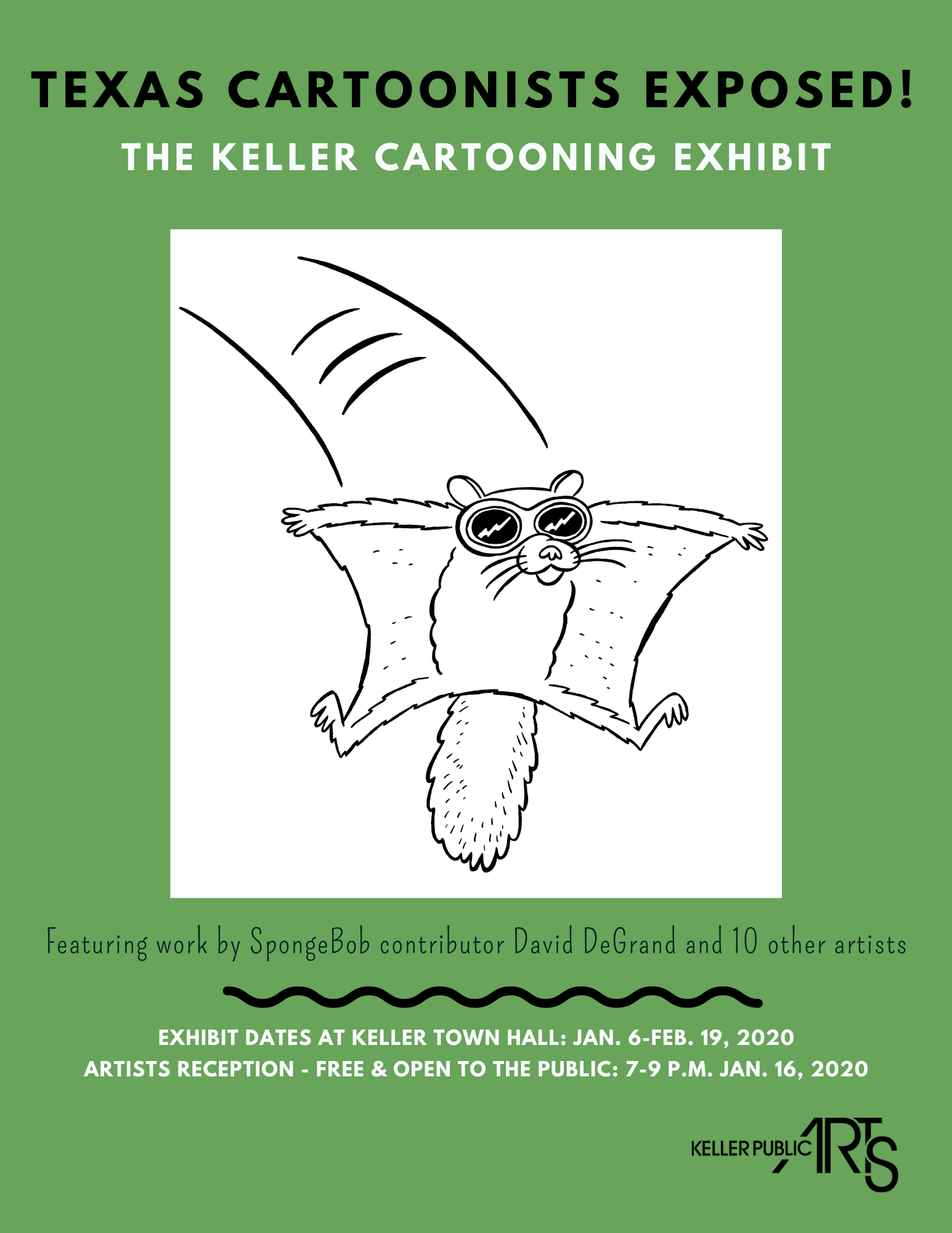 David DeGrand began drawing cartoons after being inspired by his fifth grade art teacher. In middle school some of his first cartoons were published in his hometown newspaper, and afterwards he was a cartoonist for his high school and college newspapers. Following college he did illustration work for the Fort Worth Star-Telegram and other smaller publications before getting his first big break with MAD Magazine. He has since worked on various comic books such as SpongeBob, Garfield, The Simpsons and Uncle Grandpa and has illustrated numerous children's books for HarperCollins, Random House and Workman Publishing. He is currently working on his first graphic novel. https://degrandland.com/

At 69 years old, Bill Hinds says he has easily over 100 years of published cartooning experience. And that doesn't even take into account all of the doodling. Bill is Co-creator (with the late Jeff Miller) of the sports comic strip Tank McNamara, which has been running in newspapers for 45 years. Bill is also the creator of the popular "Buzz Beamer" cartoon for Sports Illustrated Kids as well as the family participatory sports strip "Cleats," which ran from 2001 to 2010. Bill's other past publications include Second Chances, a non-sports cartoon he partnered with Jeff Miller on, the Sunday strips "Longshots" and "Clown Alley" for the Philadelphia Inquirer comics page, and the panel "According to Guinness" that ran 10 years.

Bill's newest project has been to create the characters Sprat and Gabby to add a light touch and introduce youngsters to baseball, football, soccer, basketball, lacrosse and hockey in Sports Illustrated Kids' Rookie Books. Bill holds a Bachelor of Fine Arts degree, has earned numerous awards and is the proud member of a beautiful family. https://www.facebook.com/TankMcNamaraComic/

Donnie Pitchford, "Lum and Abner" cartoonist, lives in Carthage, Texas. A graduate of Kilgore College, Stephen F. Austin State University and the University of Texas at Tyler, he worked in the graphic arts industry and worked as an educator for almost 30 years. After his first career Donnie returned to the endeavor he began at age five: being a cartoonist! The "Lum and Abner" comic strip and audio production began in 2011. Donnie has created comic book stories and art for Argo Press, written a continuity for the "Dick Tracy" newspaper strip, and has added sculpture to his ongoing freelance work. His work was featured in an exhibit at the Fay Allison Gallery at Panola College in 2019. Donnie and his best friend and wife, Laura, are members of the Carthage United Methodist Church. Donnie is a member of Texas Cartoonists and National Cartoonists Society. lumandabnersociety.org/Comic-Strip-Home.html

Eliamaria was born and raised in San Angelo, Texas and moved to the Dallas-Fort Worth area for college. She liked the Metroplex so much she made it her permanent home. Eliamaria studied theater at the University of Texas at Arlington, exploring many parts of the craft including improv, directing and scenic design. While studying at UTA she had the privilege of illustrating comics for the university paper, The Shorthorn.

Upon graduating, having a five-year old webcomic under her belt, Eliamaria hit the ground running with her illustration career and has not looked back. She has had the honor of illustrating for many collaborative products, storyboarding many projects, all while also producing her own original comics and illustrative work. She currently resides in DFW with her husband, Jonathan and little black cat, Lucius Meowlfoy.  artofeliamariamc.com

Milburn Taylor, a native Texan from the Dallas-Fort Worth area, is an advertising design graduate of the Art Center College of Design in Los Angeles, California (now in Pasadena, California) and the University of North Texas in Denton, Texas. Milburn held a variety of creative positions at nationally recognized agencies and design studios before creating Milburn Taylor Associates/Creative Services in Fort Worth, Texas (1978). In 1981 Milburn moved his family and aspirations to Austin, Texas where he opened Milburn Creative/Promotion & Graphics. Clients have included local and regional advertising agencies, public relations firms, banks, real estate companies, chambers of commerce, small business owners, as well as national and international companies.

Milburn has found that sometimes using Cartoon Art and Fun Illustrations is the best way to make your point. Milburn's friendly style of art is a great way to get your message noticed, and remembered. Milburn and his wife, Ruth, a Marketing Professor at Texas State University, have had the privilege of traveling extensively throughout the world; these travels have helped him gain a unique perspective that shows in his work. https://milburncreative.com/

Rick Brooks is a teacher and freelance cartoonist. He has taught middle school art for more than thirty years. He has illustrated comic stories for a variety of national and independent publishers. Brooks currently self-syndicates his comic strip "Mr. Morris" to six weekly newspapers. He lives in San Antonio with his wife and their two daughters. mrmorriscomic.com

William Flint is an award winning syndicated Editorial Cartoonist for the Dallas Morning News, Dallas Cowboys, White Rock Lake Weekly, Katy Trail Weekly, Park Cities Peoples News, Preston Hollow Peoples News, Bowling News and Amusement Today. He has illustrated numerous children's books, including the series Hungry for Snook and Marie's Pet Shop. Flint has also created t-shirt designs for a variety of events and organizations, designed concert posters for all types of groups, from Alice Cooper to The Polyphonic Spree and has appeared on the Discovery Channel. An avid painter with a Bachelors in Fine Arts from Southern Methodist University, Flint has pieces in the Gas Monkey Garage Shop and has shown work in several Dallas galleries. Currently, Flint is an internet radio host for the Fish Bowl Network (Gray Bowl). Find William Flint on Instagram: @flintsworld

Laura Irrgang is an artist living in Lone Oak, Texas. She works from her studio in the Texas woods, splitting her time between fine art, illustration and cartooning. After receiving a degree in Fine Arts from Tarleton State University, Irrgang taught high school art and theater. She later became an instructor for the University of Texas Informal Course program, teaching painting and art history.

Irrgang served as assistant director of F8 Fine Art Gallery in Austin, Texas and as the director of the summer art program for the Northeast Texas Children's Museum. She continues to volunteer with art-related activities and events in her community. Irrgang created the comic strip "Glitterville" featuring Eunice, the pathologically positive unicorn, and Nadine, the nasty narwhal. She was inducted into the National Cartoonists Society's Texas Chapter, The Texas Cartoonists, in January 2018. www.laurairrgang.com

Davy Jones is the Creator of "Charmy's Army," a comic strip that has been running newspapers across the country for nearly four years. Davy has dreamed of becoming a syndicated cartoonist since he was a young kid. Davy's comic strip follows the antics of a troop of army ants and a monkey in one of the most imaginative comic strips to debut in the last decade. www.charmysarmy.com

According to Middleton, he creates Fun Art. His style has a been a balancing act between cartoons and fine art. He strives for a level of bold and refined, simple and complex, instant impact and layered meanings. https://funartcollective.com/

Sisk is an illustrator, cartoonist and sometimes a filmmaker. He is a proud member of the Texas Cartoonist Society and lives and works in Fort Worth, Texas. His work has appeared in publications throughout the United States and England and is the cartoonist of the daily comic strip "PROFESSOR HERBER AND G.E.O." studiosiskart.com